Things that are difficult: Teaching

So I just finished my first full day of class. We had 10 minutes classes yesterday and had 30 minute classes today. I have so much more respect for all of my teachers than I ever did. Teaching is hard.

The returning students arrived yesterday and the new ones arrive today, which has been exciting. One of the kids that I knew from when I was here two years ago came up to me though and said: “You look fatter… and less cute.”

Thanks for letting me know? Haha. Can’t wait til I’m older, fatter and less cute. It’s all downhill from here.

This is necessarily about my life in Jordan, but I saw it on Colbert report and thought everyone should know about. Apparently, there are stray dogs in Moscow that somehow learned to use the subway system. They ride it every morning to the middle of the city where there is more food, and then take it back every night to where they live. WHAT?!?

ACCORDING TO A RUSSIAN BIOLOGY PROFESSOR: “They do not just go to the subway station, they actually board the trains. They seem to have learnt how long they need to stay on the train to leave at the right station. Sometimes they fall asleep and miss their stop. Then they get off take another train back to the centre.”

This past Friday (Jordanian weekends are Friday and Saturday because Friday is the Muslim holy day), a group of fellow faculty members and I traveled to the Dead Sea. The Dead Sea is actually technically a lake, but an impressive one nonetheless. It is the lowest point on the entire Earth at 408m below sea level (at the bottom of the lake) and the water is 31% salt, making it almost entirely barren to any real wildlife. EXTREEEEEME!

The EXTREME-ness of the lake doesn’t scare people away from swimming in it though. It’s really hard to describe the experience accurately. In addition to making every single cut or nick on your entire body sting fiercely, the high salt content makes the water extremely buoyant so that you float with literally no effort. In fact, it’s almost impossible to go underwater. At the summer program a few summers ago, some students thought that they could swim because they could swim in the Dead Sea, but upon getting into the school pool they (and I) realized that their skills did not translate to normal pool water. I was surprised at how many kids really had no clue how to swim, and then I remembered that the entire country is basically a desert with 16 miles of coastline (about the same amount as New Hampshire!). Here is a picture of me reading a 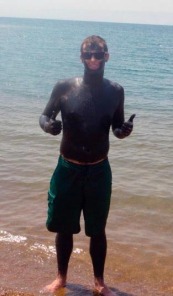 magazine (I think it’s a naughty one that an Italian tourist had brought with them) perfectly relaxed floating in the water.

Another aspect of the Dead Sea is the supposed health benefits. There are tons of spas lining the shores that somehow utilize the strange environment to make your skin super sexy (German health insurance companies will pay for trips to the Dead Sea if you have psoriasis). At the beaches there are big tubs of Dead Sea mud you can rub all over yourself use for a natural spa treatment (see picture!). EXTREEEEME! 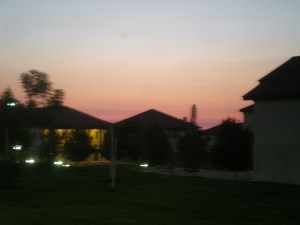 The dry, desert air and strong sun make the day feel hot (but bearable), but as soon as the sun starts setting, the air is absolutely wonderful and campus is gorgeous. It’s cool, dry and breezy, absolutely perfect. The only thing that detracts are the camels that you can hear moaning in the distance (yes, this is true). Camels make awful noises. It’s sounds like a donkey trying to give birth to a baby blue whale. Or maybe an adult one? I dunno, It’s pretty awful.

The Sunglasses are in the Potatoes

So, I’ve taken 4 years of Arabic now including 1 year of Jordanian dialect, so I’m hoping to really work on my Arabic while I am here. Not much has happened yet and my other posts were boring, so I thought I’d share some funny stories that I wrote when I was here 2 years ago (after 2 years of Arabic and 0 of Jordanian dialect). At the time, I was teaching a sixth grade ESL class to around 10 hilarious sixth graders.

“It’s really interesting knowing a lot of Arabic because I can totally see why they make mistakes where they do. For example, the word for “watch” and “hour” are the same in Arabic, so when one kid came up and told me that he broke his hour, I eventually figured out that he was talking about his watch. Also, to say “what’s the date?” in Arabic, you say “how much is the history?” so I also figured out that they weren’t trying to purchase my family records or something. Along with teaching them English, I have been learning a lot of Arabic. I can really understand a lot better than I could before, even though I can’t understand that much now. They think it’s the funniest thing when I say something in Arabic and when they teach me words and I use them later.

One day, I heard “el-naTHaara jowa el-baTaTa النظارة جو البططة “ and I was pumped because I understood what the kid said. He said the sunglasses are in the potatoes. Then I paused and said to myself, sure I understood the words but surely that doesn’t make sense. So I turned around and saw a kid trying to fish his sunglasses out of the french fries. I was very amused.

But the thing that the kids like to teach me most are insults. They are (usually) fairly harmless, like “bitashrab majari بتشرب مجاري“ (you drink sewage), or “imshee thubban امشي ذبان” (shoo fly), so it’s all in good fun. The problem came when a few of my buddies were so excited that I could speak some Arabic that they wanted me to speak Arabic with their parents at the final day celebraition. I tried my hardest, but I didn’t have much to say considering all I had really been taught were playground insults, which aren’t appropriate with people who trusted you with their children for a few weeks.”

Well, that’s from last time, but hopefully there will be more to come about this time, as I’m far better prepared to pick up the dialect now.

After a 3 hour flight from Austin to Chicago, a 6 hour layover (during which I had a wonderful dinner with the Huang family), a 12 1/2 hour flight from Chicago to Amman, and the airport business of getting a visa and going through customs, I am finally here in Madaba, Jordan. People kept asking me if I was nervous, or anxious, or (fill in the blank with an emotion), so I tried to write down what I was feeling on the plane, but I was drawing a blank. For some reason I am completely nonplussed by this move.

I wrote: “This feels more like a flight to Milwaukee than to Amman, Jordan.”

And I think that’s because this just feels right. I’ve been to this school before, and with modern technology, I might as well be 8 hours away instead of 8 time zones away. More importantly, it just feels like what I should be doing. Even though I don’t have my full teaching, co-curricular, or living assignments yet, and won’t see the classroom for two weeks… my gut reaction is good (except my gut reaction to some of the airplane food… I’m glad I had an aisle seat).

Life just works itself out. This was not my first idea for a job this year. In fact, I didn’t even apply until after I had already been rejected from 3 other opportunities. And I couldn’t be happier that it worked out like that.

FUN CULTURAL TIDBITS: One of the screens that flashed when the plane was showing information like ground speed and where we were on a map was the direction to the Ka’ba in Mecca. Also, Google now automatically searched in Arabic!

So, for those that haven’t heard, for at least the next year I will be teaching at a boarding school right outside of Amman, Jordan. The school is called King’s Academy [www.kingsacademy.edu.jo, check it out]. It is a fairly new school – they just finished their second full year of operation. The King of Jordan, His Majesty King Abdullah, graduated from Deerfield Academy (a boarding school in Massachusetts) back in the day and wanted to create a similar school for his home country. So he did. And I’m working there!

I am teaching 11th grade Physics and serving as a dorm parent and adviser. I will also be helping out with some sort of extracurricular activity, soon to be determined. I’m crossing my fingers for something cool…  maybe I could bring lacrosse to the Middle East. Additionally, I hope to get involved in the community, improve my Arabic and feed my raging travel addiction.

I’m moving August 14th and will return… well, who knows? I hope to be in the DC area next summer before returning to the school, but if I’ve learned anything about myself it’s that it’s pointless making a real plan in advance.  So, please keep in touch so that I can be a part of your life wherever we end up. Hopefully this blog will help, but hopefully it’s not a one-sided way of communication.

This was the view I had in 2007 of the Sinai Peninsula from the Royal Jordanian flight I took to Amman in 2007 when I taught at a Summer Enrichment Program at King’s Academy. I’m excited to see this view again!