Living in Jordan instead of the US reminds me of living in New Hampshire as opposed to Texas – from my home I could drive about 2.5 hours and reach 6 different states or Canada, where Texas is more than 12 hours across. From here in Amman, it takes only a few hours driving to reach a different country, and instead of just being in Upside-Down New Hampshire instead of right-side-up New Hampshire, you end up in a completely different culture. That’s what I did this past weekend when I took a two-day trip to Damascus (Dimashq, دمشق, in Arabic).

The trip itself was very smooth, only due to the help of a Syrian student here. His family helped us get visas (we met Americans at the border who had been waiting 9 hours!) and offered us a ride to and from the city right from school (since he goes home nearly every weekend in a pretty big car anyway). Then, when we were there, his family took us out to one of the biggest meals I have ever eaten. Truly Arab hospitality, very hard to beat.

But Damascus was a really wonderful place – it feels like you are transported a few centuries back into the past with the old, wandering streets filled with people. Highlights included being invited into a backgammon board (and other handicraft) workshop, watching the sunset and the lights come up over the city from above, taking a Turkish Bath, visiting one of the most magnificent mosques in the world and Syrian ICE CREAM! Below is a picture of me trying to fight the crowd to deliver the Syrian Ice Cream, which was a delicious vanilla-type flavor rolled in pistachios. I posted a ton more pictures on the pictures page, in addition to an album of pictures that I have taken from the windows of planes. Cheeeck it out. 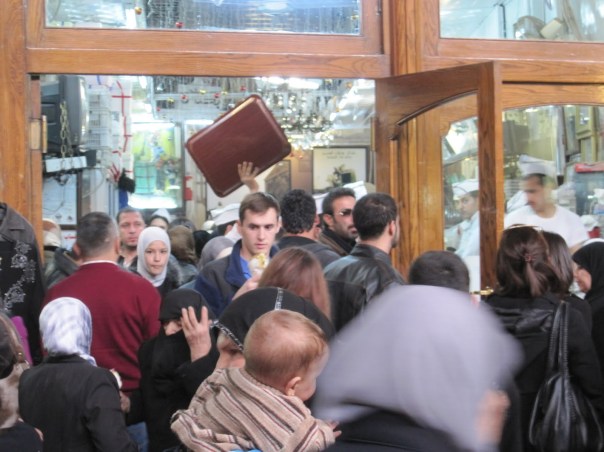