Instead of TGIF (Thank God It’s Friday) we have TAIT here in Jordan (Thank Allah It’s Thursday) with our strange (for me) work week ending on Thursday. I often have difficult Thursdays class-wise, with two classes after lunch, one in the last period from 3-3:45 pm, which luckily enough happens to be the section where all my rambunctious knuckleheads decided to conglomerate (they are incapable of virtually anything during this period). I’m always looking for things to try to get me through the day before I can crash for the weekend, and one of the things that has worked is Bow-tie Thursdays!

For those that haven’t been following the blog since the beginning, I decided early in the yearthat since bow-ties are such a novelty here, that I would become the bow-tie man. Soon after I started wearing them, I decided that it would be a nice treat at the end of the week – a bow-tie to get me through Thursday, perfect. And then some students began pestering me about the bow-tie, so we decided that we would start a bow-tie club and all wear bow-ties on Thursday.

I immediately tried to get the ball rolling (this was October) with the help of others at the school to try to get bow-ties with the school colors so they would count as dress code and be official. I sent off like 12 emails, people had the school had many meetings on my behalf, we looked at proposed designs and a few months later (ha) a sample came in. Unfortunately though, the sample was for a pre-tied, velcro stick bow-tie – the clip-on tie equivalent in the bow-tie world – bummer. When the suppliers came to school for a meeting, I offered up a few of my bow-ties as samples so they could see exactly what we wanted to order. But, apparently when they were unveiled at the meeting, the suppliers said something to the effect of “We have never seen something like before, we need to send it Indonesia.”

Now, I’m sure that’s not what they said, but that’s exactly what they did. They sent one of my bow-ties to Indonesia to figure out how to make them. The bow-tie I wore today for Bow-tie Thursday has been in Indonesia. I feel awful that this has been such a hassle for the great people in our school who have to deal with issues like this, but the bow-tie ball is rolling and aint nothing going to stop it now. We will get King’s Academy bow-ties, I will have a following that will wear them on Thursdays, and we will all find ways to help us get through those tough Thursdays…

I thought my car was skinnier than it was 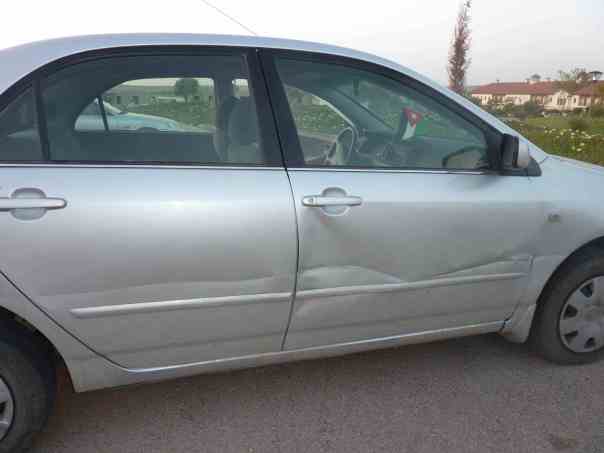 I had a wonderful long Easter weekend a week ago with Brian and Val, but the car did not. Given the insanity of the driving here, I’m surprised it took two months but I finally made my first contact with another vehicle in Jordan. Pulling out of a parking spot in Petra in an extremely narrow road I scraped the entire side of my car along a parked truck… eeeeh. I thought it wasn’t that bad but then when Brian tried to get out of the passenger door, it wouldn’t open. And the window only rolls down halfway. And it looks like a Frankencar now. I feel absolutely awful because I share the car with two others, but such is life.

The good news though: notice the small Jordanian flag on the dashboard… pretty awesome. Another step on the road to becoming completely Jordanian.

I will be awarding a prize to whomever can guess closest to the cost of the repairs. Just leave your guess in the comments section on this post. It must be in dinars (1 JD = $1.40) and I will award prizes Price is Right style (closest to the answer without going over). I honestly have no idea because some things are ridiculously expensive, but others are frighteningly cheap. My driver’s license cost 215 JD ($300), but my monthly phone bill is usually about 4 JD ($5.60). It costs 1 JD ($1.40) for a move from the fake DVD store, but real ones from a DVD store in the mall are like 25 JD ($35). Guess away and I’ll do the same…

I love camel faces! This is a picture from riding a camel in Wadi Rum during Brian’s visit. It was an absolute blast, but I ended up with strange bruises in strange places from the camel saddle… I guess I’m not surprised, the seat was awkward which is fitting for the most awkward animal this side of the Mississippi. I’m thinking about quitting teaching to become a camel dentist, but that might be too big of a task. 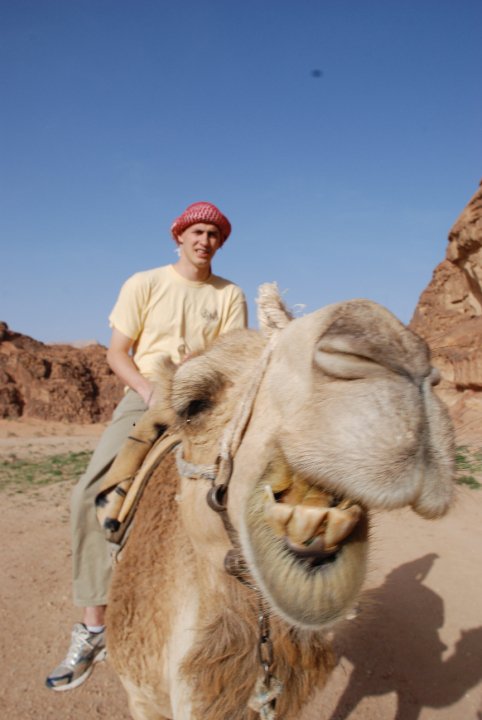 Dancin’ with my Barber: Right at the end of spring break, I went to the hotspot restaurant here in Madaba called Haret Jdoudna (which my fellow faculty and I have been to mmm maybe 50 times) with a few new Belgian friends that I met in the desert with my parents. It was a weekend night, and the restaurant always turns into this strange mix between a restaurant and a dance party, with an equally strange mix of loud American techno remixed pop music and loud Arab techo remixed pop music. We got up and danced around a bit, though I was certainly reluctant – scanning for a way to get out of it, I noticed that my barber, Nasri, was standing off to the side, so I went over to say hi. We did the awkward kiss hello which I still haven’t mastered (it’s one kiss on one cheek and then like 2-6 on the other… maybe?) and we had an awkward mini-conversation  in broken, trying-to-talk-over-loud-music Arabic. I said goodbye and then went back to pretending I was dancing (mostly just clapping) when all of the sudden Nasri’s head was between my legs. I looked down in confusion and was told I had the strangest look on my face… he stepped forward, jammed his shoulders into the back of my thighs and lifted me up in the air so that I could dance-clap for everyone to see. It was absolutely hilarious, and was really the only time I got into dancing with the strangers. I can’t wait to get my next haircut to see Nasri again (and also because I looove haircuts here).

Did your parents go home? Then, earlier this week, I took a few students to one of my favorite spots that I have mentioned probably six times already – it’s called Hashem’s and they sell basically hummus, bread, falafel and wonderful tea, all for like 2 bucks a person. When my parents visited I took them there; when Brian and Val visited I took them there; whenever I want to escape from campus and don’t feel like paying Amman prices for eating out, I go there. Every time I go, I see this one waiter who kind of runs the show, a portly dude with a good humor about him and he always lets me order and speak to him in Arabic (even though I’m sure his English is better than my Arabic). This past time, when I was paying (5 JD = $7 for me and 3 students) he asked me if my parents had gone back to the US yet. It took me a bit to figure out what he was talking about until I realized that he actually recognized me and had recognized that my parents were visiting (and weren’t regulars, because I am the regular), but when I did I was pretty pumped.

Moral of the story: I need to find new places to eat, because I go to the same places pretty much every time. But Moral Jr: Life is good when you feel at least a bit more ingrained in life here than the average tourist.

I apologize that I haven’t blogged in a while, it has been a rough couple of days here on campus. When returning from Easter break, one of our school vans was involved in a horrible car accident that left two students in the hospital and one student dead. Ahmad was a wonderful young man, a senior 3 months from graduating, and really the ideal student here. He was from humble means and really took the amazing opportunity he had here seriously. He was well loved in the community and will be sorely missed. Please just keep him and our community in your thoughts.

Back on the Tour Guide Circuit

Two weeks after my parents came to visit I’m getting my second visitors to my new (well, 8 month old) home in Jordan – Brain Garvon, one of my best friends from college, and a fellow Wahoo ’08, Valerie. They are on a 2 week bender around the Middle East, having spent the last week in Dubai and Istanbul, and they are spending the next five days here in Jordan. It should be a blast, even if I will be doing the same exact things that I did 2 weeks ago with my parents. If you are thinking about taking a trip sometime I would highly recommend coming here while I live here because I’m getting to be a good tour guide.

Brain asked me if I wanted anything from the states, and all I could think of at the time was a bagel (even though now I have a list of like 6 things I need), so he wrapped a bagel in saran wrap and toted it around the world for two weeks. He presented it to me today – it’s incredibly moldy, but as he said “It’s the thought that counts.” To make up for that, Brain and Valerie also brought thin mints (jealous?), definitely giving them a one up on my parents. A good start to what should be a wonderful four days…