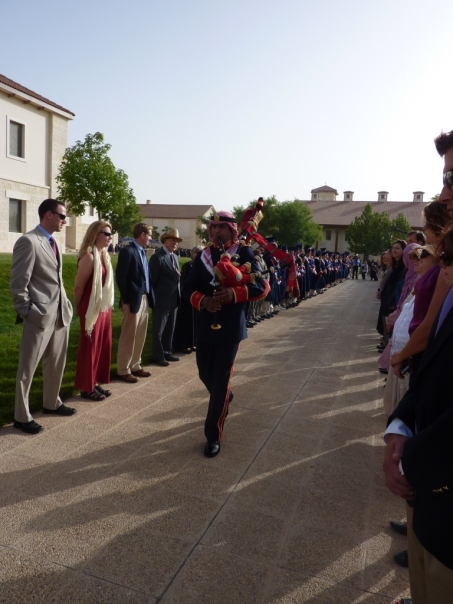 We had quite a momentous occasion the other day, celebrating the graduation of the very first graduating class from our school. After three years in existence, we are pushing our first products out into the world to see how they fare. I am going to miss some of my seniors terribly and will always remember them as my first students.

It was quite strange to be on the other side of the equation (really much more so than I thought it would be) – I marched in with the teachers, cheered for my favorites from our teacher section, marched out with the teachers and then felt really awkward breaking in on celebrating seniors to say congratulations. As close as you feel with students, there’s always at least a paper-thin barrier (that I am sure might thicken as I age). A few of my students immediately dropped the Mr. though, which I appreciated…

The ceremony was a nice mix between Western and Middle Eastern ethos, a perfect tribute to our school which seems to be attempting to fuse the two together into one high school experience. The whole affair seemed to mimic Deerfield’s ceremony from what I could gather with some important deviations to accommodate the fact that we were including royalty. We started with this strange but very cool march where the whole school is lined up facing each other in a two line gauntlet (see picture above) and then inverts so that everyone passes by everyone else – which means that since His Majesty was leading the line, that he passed literally inches in front of my face (and a few inches below – I’m much taller 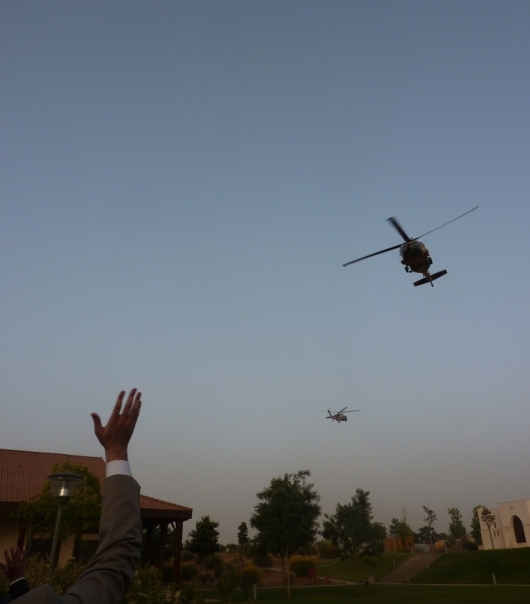 than him). It was quite an experience for me and one that I think I will truly treasure (I guess until next year when we do it again). Then, the actual graduation had a sort of formal Western structure to it with a Middle Eastern sense of enthusiasm and energy. There was almost non-stop cheering once the names were read, with little regard for the idea of remaining seated, and much excitement due to the presence of His Majesty until he departed piloting his own helicopter (see picture to the right).

The whole day just had a great energy to it and I think it was a nice end to the start of our school. To be honest, I think that the upcoming classes are far stronger than the one we just graduated, so I am excited to see the same enthusiasm that we had this year amplified for them. We’ll miss the class of 2010 though and I hope to keep in touch with many of them.

More than anything, I’m just a little weirded out at how fast everything is moving – my first year teaching is nearly done (6 class periods left, one homework assignment to grade, one final to proctor and then one final to grade), and this graduation happened to be at the same time as my fifth year high school reunion. I have this very strange sense of my age here, because sometimes I feel incredibly young (the oldest teacher is about 50 years older than I am) and sometimes I start to feel incredibly old (when my students do things that I know only teenage minds could possibly think of… or when my hairline continues to recede). I guess I should treasure that first feeling as long as possible.

Posted on June 5, 2010, in Jordan, Teaching. Bookmark the permalink. Leave a comment.