I just taught my AP Calculus class the unit of Volumes of Revolution and Volumes of Known Cross Section. Overall, it went fairly well, mostly because I gave it a little time (I rushed through other topics that I deemed less important like inverse trig functions to be able to have a little extra time for volume). I felt like I did an excellent job with the cross sections, but not quite as good job with revolutions… so let me explain why:

1. Visualizing Volumes of Revolution
…but struggling with setting up the integrals

The two things that I focused on, and correctly so, were getting students to visualize the solids and to construct the integrals using an understanding of the accumulating process. Luckily, I read this awesome post from square root of negative one teach math about how she approached this. I read it the night before I started so I couldn’t get the awesome tool she used, but there was a great tip in the comments about attaching a pencil to a drill and then revolving a region with that. I used a motor from the science lab and a pencil: 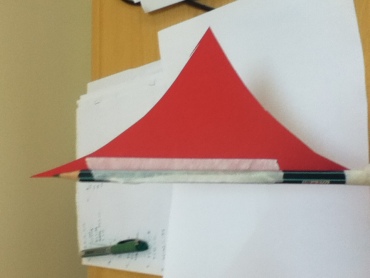 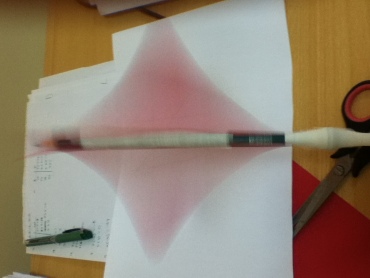 Kind of hard to see in the picture, but it worked okay. Truth be told though, I got frustrated with it and didn’t end up using it, though I think it would work. Instead, I relied on Winplot, which is a computer program that can construct these solids, and some basic physical demonstrations with pencils and pieces of paper (with the same principle as the demo above). These visualizations helped some students (as the visualization above would have), but some students still could not figure the revolution part out, especially when there was a hole in the solid from revolving a more complicated region..

The thing that these visualizations did not particularly help with was going from the visualization of the solid to the integral. I think they had this difficulty because the region that they are focused on in the visualization is still the region being rotated, and it’s not those circular cross sections that they need to add up. I had one girl who could not figure out whether the circles were being added up in the x or the y direction and kept drawing her circles in the wrong direction (even though she had the shape of the solid drawn correctly). Most students got it after a while, but I was not really that sure if it was being able to trudge through that process after seeing a ton of examples or if it was actually deep understanding.

2. Visualizing Solids of Revolution
… and nailing the integral set up

But the cross-sectional solids were a different story. I did an AP Calculus workshop this past summer and I was far less than impressed at the time. I regret my attitude now though because I am realizing throughout the year that I actually got a lot of really useful things that have helped my teaching this year. This was a simple idea that the facilitator mentioned that I think worked really well. To construct the volumes of known cross-section, print out the base area, lay down some Play-Doh (or I used the sticky reusable poster tack), and then shove cross-sections in there to make the solid. This one is the solid with a base as the region bounded by

and the x-axis with semicircular cross sections perpendicular to the x-axis: 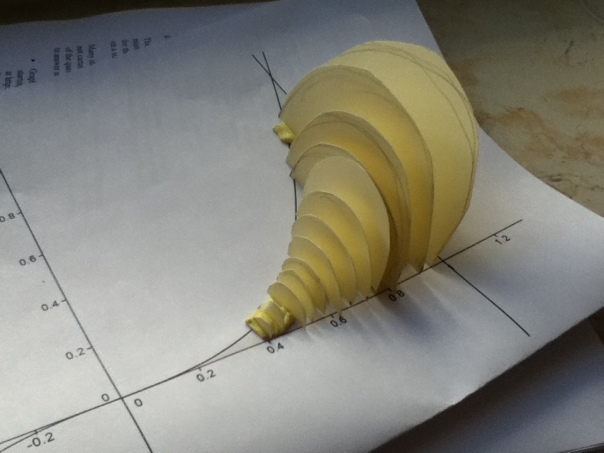 The idea from the facilitator was to have students construct these themselves, and I think that’s a great one – it would just take a lot of time with a whole class. Instead, I made a few of these (which only took me about 20 minutes) and then had students use the models to write down their idea of a how the solid is constructed FIRST, before ever being given a description. They then compared their descriptions to the textbook/AP problem style descriptions, and were like “duh, that’s what we wrote.” I was really surprised, because I teach all students for whom English is their second language and thus struggle with written descriptions like those of these solids, and also one of my colleagues had ranted last year about how hard this topic was to teach because the students couldn’t visualize the solids. But it seemed like letting them construct meaning directly from a hands-on visual model first was a good key to understanding the lengthy descriptions of these solids.

I focus on the two things highlighted: first, write an integral ignoring the function that just shows the shape you are accumulating with its area equation, the direction it’s being accumulated, and the bounds. Then, go to your function to find out how to fill in the dummy variables in the area equation (like “r”). After that, you can just substitute everything into an integral and can stop thinking. I think the intermediate form made the connection between the integral and the solid and helped them really use the visualization they had in their mind for the math. The results proved it too – they really rocked this question on the Mock AP Exam, but didn’t do as well with the revolution.

So what was different between the two solids? The visualization for revolutions has less to do with the integral than the visualization for cross-sections. I realized that students were forced to try to picture the revolution, understand the accumulation and translate all that into an integral, which is a lot to absorb all at once, especially when not all parts are directly related to each other.

So what that I am going to change next year? When teaching both types of solids, I am going to show them first, have them come up with their own descriptions, and THEN show them how we would mathematically describe the solids. Also, I am going to try teaching the solids of known cross section first, because the construction of these (though often a bit harder to visualize) helps teach the accumulation process that is the important part of a solid of revolution. Then, instead of trying to understand all the new concepts at once, the revolution becomes just a step to create a solid that can be integrated similarly to something they have seen before. Also, I am going to supplement the visualizations I used this year with one that shows the region split into discs too. Perhaps with these changes my students will focus more on the discs/washers than on the revolution itself, and thus be able to set up the integrals more easily. And perhaps my notation like this will make more sense than it did this year: