I wrote about this project back on Sam’s blog this summer when Sam gave me reign of his kingdom for a month or so, but I wanted to share the student work that I got this year from it, because it was much better than last year, and some of the work is actually really beautiful/cool/interesting (Math Art, MArTH anyone?).

The basic premise of the project is to RECREATE A PICTURE USING INTEGRALS by doing the following:

I initially waffled about whether this was a worthwhile problem or just an exercise in integrals, but having taught AP Calculus this year, I realize how these problems of just finding the area of a weird shape are interesting and important for deep understanding of the connection between a Riemann sum and how the integral actually calculates area. So basically, if you think that this is a worthwhile problem…

…then this project is just a glorified, more interesting, more complex version of that problem. If you don’t think that problem is worthwhile, well, then you probably wont like this either. Regardless, it was a great thing to do to hammer in ideas about finding the area between curves, and a great learning mode while AP’s were occurring because attendance did not really matter all that much. It took most students 3 and a half 45-minute class periods (so about 2.5 hours), though I think that more efficient students not freaking out about standardized tests, and consistently present in the classroom, might be able to do it a little quicker.

SOME OF MY FAVORITES: 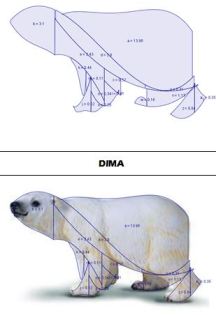 ALL OF THE STUDENT WORK:

And the Calculus Final Projects Begin

For the last week and half of school, my non-AP Calculus class is embarking on a free choice final project. The only requirements are that they must use some sort of Calculus, they must use a real artifact (data, a picture, a video, history etc), they must incorporate technology, and they must find a way to present it to their peers.I have been so excited to see their creative streaks and see some of them get really excited about this, especially because I am impressed that they are still energized two weeks away from their graduation.

Here are some of my favorite ideas. Note that some are not very sophisticated, but are interesting nonetheless and I have been supportive regardless, as I want to see them really carry out something that they feel is their own. I will report back on these after a week and a half when they are done.

And there are lots of other great ideas too! I liked the ones above because they took one of my ideas for a prompt and totally made it their own, or just came up with something totally random that they wanted to do. I’m excited to hear how these turn out. I had a million other ideas too… here is the packet of ideas that I gave them to get them thinking.

Posted in Calculus, End of the year projects

Skills instruction was something that I was not good at when I first started teaching. I found it boring compared to big ideas and didn’t really understand why kids didn’t get things from me doing problems on the board and then them doing practice problems with each other or individually or for homework. For me, it was like “What is there to understand that simple practice wont solve?” Well, I have grown a lot since then. This year, I have implemented a lot of new tools (many whiteboard based) that have really helped out with my skills instruction. I feel like I really had a great sequence this year when doing the skills part of integrating with my regular class – I wanted to share and reflect, especially so it’s written down somewhere for me to use in the future, because some of the ideas will be useful when I teach other topics.

Just so you know how I lead up to this seminal topic in Calculus… First, I spent a considerable time (about five 45 minute class periods) exploring everything to do with Riemann Sums, both in terms of pure area and what area means in applied situations. I think that feels like a lot of time, but we tackled the conceptual side of integration very throughly and used that to motivate the idea of an antiderivative/integral. Once we motivated the integral, we focused on learning how to find antiderivatives, which is the part I want to talk about.

1. Guess and Check With a Partner

With inspiration from a great worksheet from Sam, I wanted students to rely on their intuition at first to find andiderivatives, instead of relying on formulae. I’ve tried things like this previously, but it really helped this time to explicitly explain that this is what we were doing – that maybe eventually we can rely on a rule, but we are going to discover the math first. I paired them up with whiteboards and set them out with the list of functions from Sam’s worksheet. Their goal: find the antiderivative of all the functions. The method: each person had a marker. One person would write down a guess for an antiderivative, and the other person would simply take the derivative of this to see if it went back to the original function. They would keep doing this until they got something correct, then write that answer down on the sheet. Then, after one person has been the “guesser’ four or five times, they switch. Example:

For the kids that actually did what I asked (others just kind of started solving them on their own, which is okay I guess), it was a really nice exercise. They worked together really well, and were so excited to tell me the rule that they had made up for integrating power functions. I had them even doing simple substitution, per great suggestion from Sam. They got good at just getting themselves to try something, and getting in the habit of checking all of their answers. One kid at the end of class told me “My brain hurts from thinking so much.” Then, after the students were done, the next class we started by collecting rules they had noticed, and it made a nice little automatic cheat sheet for them. –> SHEET WITH FUNCTIONS HERE

Next was to tackle more complicated functions with which we could use our rules, mainly negative and fractional powers. I did this same exercise in the fall when learning how to differentiate these functions to much success, and then tried it again with differentiating power functions to much confusion (so I guess the activity has a specific niche). The idea is that everyone starts with a problem, does one step and folds over the sheet so that only their work is visible. Then everyone rotates their problems around. The next person does the next step, and then folds the paper so only their work is visible. The group keeps rotating the papers until they are all done, then they open them up and look for mistakes (if there are any). Example:

This was good for helping them drill some algebraic manipulation and develop the skill of checking their own work for mistakes… all while working very closely collaboratively. –> FOLDABLES HERE

After learning basic integration skills, we began to talk about how functions have more than one antiderivative, and how sometimes it is useful to find a specific one. After only one or two examples together, we immediately just started practicing this idea with an activity that I stole from Mimi where I placed problems around the room with the answers on the back, the idea being that students would go solve whatever problems they felt like they needed to. Example: 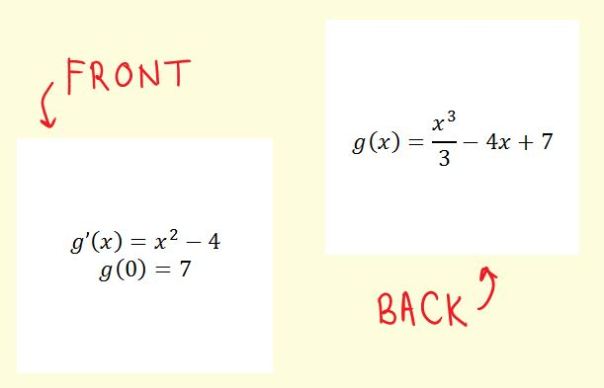 I enjoyed this for many of the same reasons that Mimi cited in her original post. Students could work at their own pace without feeling like they were falling behind, could pick their own problems, and could move around the room to interact with many different people (which are all huge advantages over just doing a worksheet). –> FLIP PROBLEMS HERE (though the formatting is a bit screwy)

After two days of a little bit more traditional style instruction just to make the connection between the definite integral and area (a lesson that I need to make more discovery based next year), we then did the Mistake Game, an idea from Kelly, which I have described a few times now. Basically students work out problems on whiteboards and hide a mistake in their solution. They then present their work like as if they didn’t make a mistake and the other students have a discussion to try to find their error. The problems I chose for the mistake game where all functions for which you had to do some sort of simplifying before integrating (like distributing or dividing), which ended up being a great way of pushing them a little bit forward while giving them plenty of opportunity to really go in depth discussing this new mechanical process of a definite integral.

Then the last skills activity I did with integration was a few days later when we started doing substitution. I had them first try a bunch of substitution problems intuitively, and then showed them how to use a u-substitution. Then, we pulled out the whiteboards and I gave them all a sheet of problems and two markers each. They were to do all u-related work in red, and all original-integral related work in blue. What I wanted them to get comfortable with was envisioning the transition between the variables and helping see how the skeleton of the integral becomes the “outside function” of the backwards chain rule. Example: (actual student work) 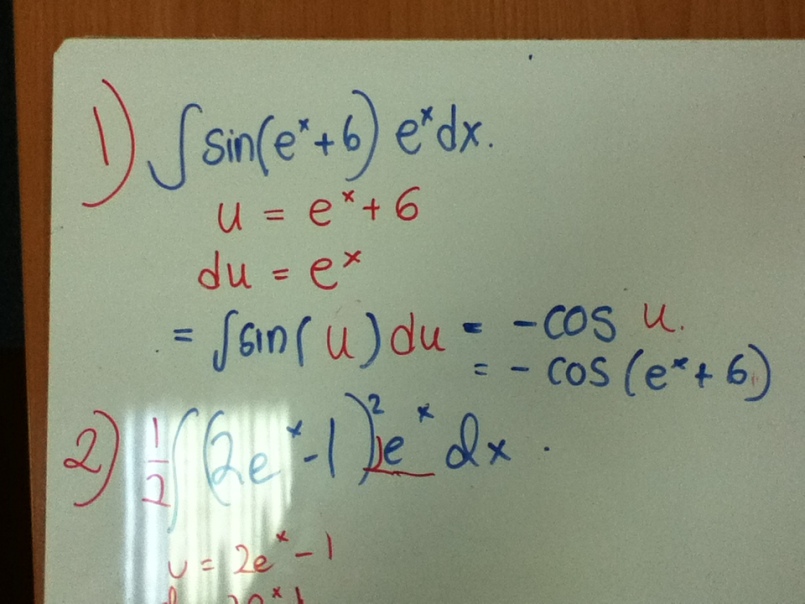 This was, again, one of those activities where a bunch of students totally ignored my directions and just solved the problems (and again, not the worst thing), but I think some of the students that did it like this really benefited from using the different colors.

So why did I just ramble about all those activities? I guess what I loved about this whole sequence is how ridiculously much of the instruction for a good week and a half or so was collaborative and engaging, and forced them to think about what could have been routine material in different ways instead of just plowing through worksheets and drills. I feel like I never would have been able to pull something like this off even last year, so I am so grateful (especially to the online community) that I now have a toolbox full of sweet teaching methods. My goal is to try to mix these types of activities more often into various units, since most have skills based components. I would love any other modes of instruction that you use in your classroom to add to my toolbox!!

Side note for the Calculus people: There are a few antiderivative/integral related traps that my students fall into… any ideas on how I can stop these problems before they happen?