I’ve been getting pretty into cognitive science lately. I realize some of it is useless, and a lot of the rest of it is made up of kind of common sense things once you really think about it, but regardless, I have found it so helpful to put scientific names and research to intuitions I have in the classroom. One of the ideas that I have really liked (from Daniel T Willingham’s Why Don’t Students Like School?) is that we learn everything by connecting it to things we already know, and much of what we already know is concrete. Thus, the more you can teach through concrete examples, the more likely students are to learn the material.

This year, while teaching the Intermediate Value Theorem in AP Calculus, I did not start with the theorem itself, as I always find that language so intimidating for what is actually a simple idea. Instead I started with this: 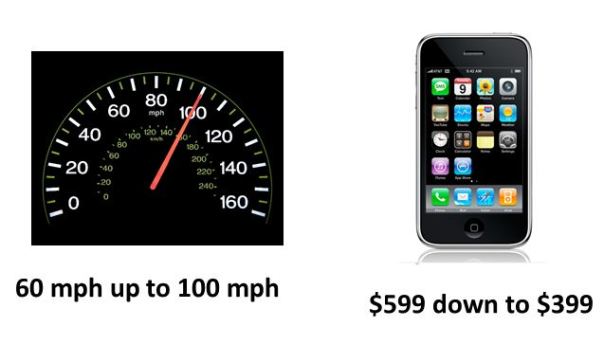 I showed them a video of a speedometer that cuts out for about 10 seconds in the middle (ah, you’re dizzy and you pass out for a second at the wheel!). Before the cut out spot, the car was going 60 mph, and after it was going 100 mph. I then asked the to tell me:

We talked about this for a few minutes, letting the students argue a bit about their thoughts and came to an agreement as a class. Then I put up a new picture that showed the original iPhone prices at some intervals. It started at $599, a few months later was $399, and then two years later was $99. Then I asked very similar questions:

Again, I let them argue for a bit and discuss. After we had settled on answers, I asked what was different about the situation, keeping in mind that we had already discussed continuity in the class, but I had never mentioned this in this situation. Students said wonderful things like “To get from one price to another, the iPhone doesn’t have to pass through the other prices” and “Prices can can jump whereas speeds can’t” and I let them continue to do that until one student finally realized “Speed is continuous, whereas price is not!”

Prepped with the ideas of theorem, we took the speed situation and translated it into a mathematical theorem before looking at the actual Intermediate Value Theorem. It took about 10-15 minutes of class, which was well worth having a strong conceptual understanding of the theorem. Students still struggled mightily with proving anything with the theorem (as they have in proving anything mathematically both this year and in previous years – any advice there?) but the conceptual development of the idea was not only quicker, but I think stickier.

Isn’t that better than starting with this? 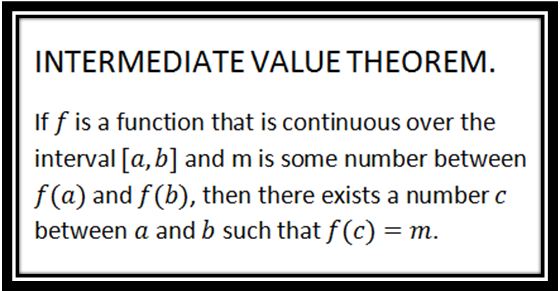